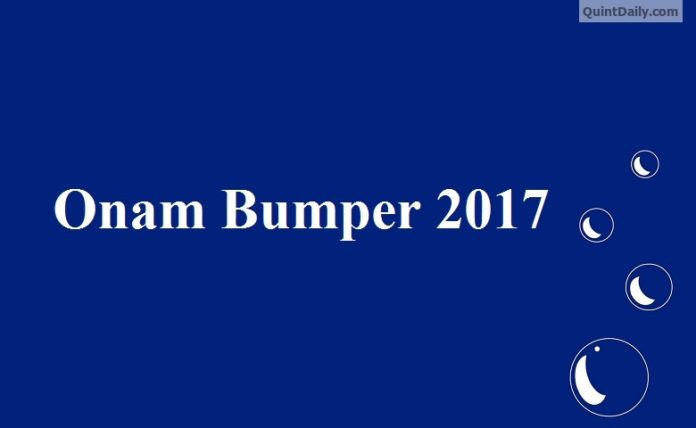 Onam Bumper BR 57 lottery ticket has been sold out for 250/- per ticket throughout Kerala(India) by various authorized agencies as well as people who trust Kerala Lottery tickets for their living. The people who sell each ticket will get a commission amount per ticket ranges from 20/- to 40/- depends on a number of lotteries releases from the respective agencies.

Onam Bumper BR57 Lottery Tickets details are as follow below.

Series updated sounds Interesting Right? Alike the same, the Prize money also truly touched the wider audience other than the Keralites. Actually, this year the usage of GST in India additionally getting impact with Onam Bagyakuri. This is the primary draw of Onam Bagyakuri after GST execution In India. According to Finance Minister proposal finished with GST and Kerala Bagyakuri, the Onam Bumper winner of the same up to fourth prize will get influenced by the same.

The GST effect will surely impact every Kerala Bumper 2017 winner for 1 to 4th Prizes after the official declaration of Results. The Result of Draw has been scheduled by Kerala State Lottery department on 20th September 2017 by 2 PM. As the results unveiling on Next Wednesday, which sounds like Akshaya Next series update for AK 311 results will be get postponed to another week later after the same draw.

As per Calculation, Kerala Government is getting a record collection of the budget through this Kerala Onam Bumper. Each Ticket has been selling for 250 Rupees, which unveils the fact that, after the release of each ticket commission to respective agencies, per ticket government were collecting around 200/- profits. BTW, the records were saying, 1 lakhs of tickets were getting sold out per day, this really sounds Interesting fact that for 10 crore Prize ticket, the government is filling the budget with 2 Crore Profit daily and Which means 60 Crores by 30 days.

Uh oh.!! As we as know that, GST also affecting this legal gambling, in India. Thus, however, as in form of GST, yet another percentage in crores in terms of profit is collecting by the Kerala government with respect to Kerala Lotteries. For more updates regarding the results and live winning reports of Kerala Onam Bumper 2017, Follow Quint daily.